The Frieze week in London is always exciting!  Recently, the challenge has been how to deal with “fairtigue”. After researching all the VIP events, as well as the museums and private gallery openings, one has to prioritize which events to attend and where to be.

Anthony Gormley’s ambitious exhibition at the Royal Academy of Arts expands his 45 year career including new installations created specifically for the space. This is “an immersive drawing in space made from kilometers of coiled, flexible metal” which invites visitors to walk through and interact with the materials.

This installation includes “24 life-size cast iron figures set at different orientations on the walls, floor and ceiling – challenging our perception of which way is up.” Lost Horizon I, 2008. Courtesy of the Royal Academy.

We are arrived at the opening of Kara Walker’s monumental exhibition “Fons Americanus”  in Turbine Hall at Tate Modern and were struck by the powerful installation of the 40 foot high fountain. It depicted “a Black woman with jets spouting from her breasts and cut throat. Walker draws references to Damien Hirst’s shark , the Victoria Memorial outside of Buckingham Palace and J.M.W. Turner’s Slave Ship. 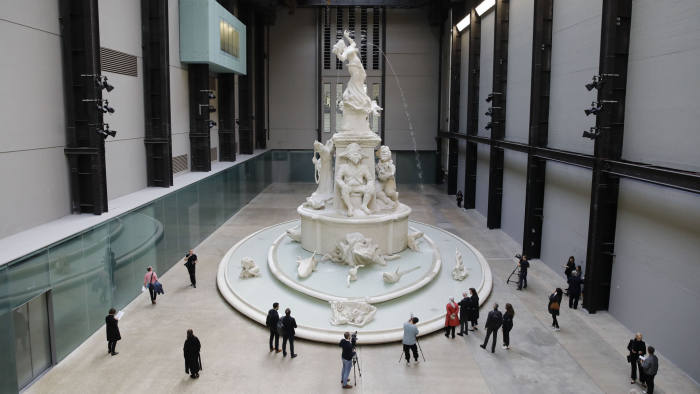 At the Frieze VIP opening in Regent’s Park on Wednesday morning we headed over to the contemporary section. One of the highlights is the Aike gallery from Shanghai, featuring Tang Dixin’s performance “Rest is the Best Way of Revolution”. It is an ongoing project in Shanghai and Tokyo since 2013.  His intention is to address the non-stop hectic world we all live in.  Visitors may tell the the artist, who is dressed in a doctor’s white gown, which parts of their bodies need to rest up. We saw people leaving the booth with white bandages on their heads, necks, hands and backs. Donna Huanca ‘s installation of large abstract paintings at Simon Lee gallery challenges our perception of how we look.  Grayson Perry was holding court at Victoria Miro where his ceramic vases and tapestries were on view satirizing commercialism and high fashion.

The Frieze Masters Fair boasted  “Botticeli’s  portrait of Marullo Adventurer Poet” the most expensive painting ever offered at $30 million at an art fair by Trinity Fine Art, London.

Moving on to the galleries which presented extraordinary exhibitions including  Ordovas’s “Peggy Guggenheim and London”. At age 40, Guggenheim opened Guggenheim Jeune at 30 Cork Street in 1938 which was closed 18 months later in 1939. An Arp sculpture was the first work of art she ever collected. Thus began her adventure as an art addict. The South African based gallery, Goodman recently opened on Cork Street. Founded in 1966, their established artists, William Kentridge, Alfred Jaar and Shirin Neshat are now being shown alongside younger contemporary artists from Africa such as Grada Kilomba and Tabita Rezaire.

Other stand-outs include the retrospective exhibition of Twombly’s  sculpture at Gagosian, new paintings by Mark Bradford at Hauser & Wirth and Nate Lowman’s violent and disturbing  interior paintings at Zwirner,  commemorating the 2nd anniversary of the Las Vegas massacre.

If you haven’t seen enough art, the three auction houses held evening and day auctions. The star lot was Banksy’s “Devolved Parliament”. It was installed in the dark  room at Sotheby’s,  with security guards surrounding it. The painting is monumental, highly amusing and timely! The final selling price after 12 minutes of bidding was $12million. This price surpassed Basquiat’s Pyro and Bacon’s Figure with Monkey offered in the same sale.

It’s always exciting to visit a young artist in his studio. On Friday we went to see Luca Longhi, who graduated last June from the Royal College of Art. His work is about food and how food relates to community and our well being. He utilizes wood and tile to convey this message.